JUUL, a well-known manufacturer of nicotine vaporizers, took advantage of the chance to market to those under 18. Young people who have never smoked have been persuaded to try nicotine because of the company’s careless marketing and product design, increasing their risk of addiction and the myriad of health issues that may follow. Americans who used a JUUL vaporizer before November 2018 and before turning 18 and then became addicted to nicotine have their claims reviewed by the Law Office of Joel A. Levine.

The makers of JUUL e-cigarettes and vapor pods, JUUL Labs, are being sued because they failed to sufficiently alert customers to the hazards involved in using their products. Despite being marketed by JUUL as a safer alternative to traditional cigarettes, their products contain nicotine. JUUL products include substantially more nicotine than their top rivals, and nicotine is a highly addictive drug with serious potential for harm. 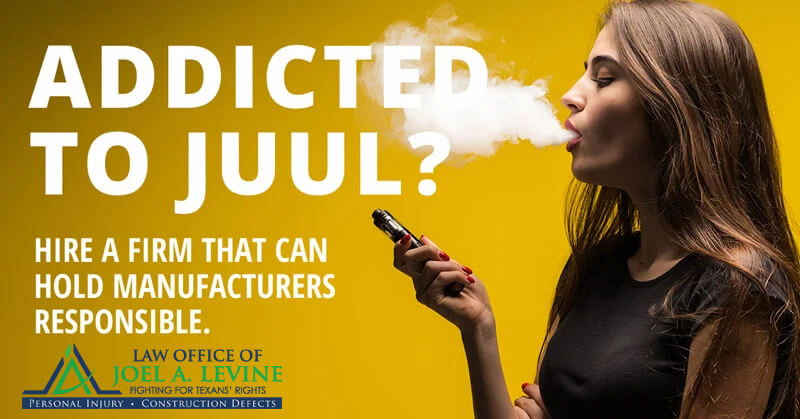 Although nicotine can be detrimental to anyone at any age, studies have shown that it is hazardous to children and teenagers, who are also far more prone to develop a nicotine addiction. JUUL may have even directly advertised to kids and teenagers while failing to do enough to adequately inform users of these risks.

Teens and kids have never been less likely to smoke cigarettes regularly, so for them, JUUL typically isn’t a replacement for a risky habit. Instead, they start a brand-new pastime because they think it’s “cool” and because it has flavors they like.

JUUL has garnered the most attention in the competition to rule the rapidly expanding e-cigarette industry. According to a recent appraisal, the corporation is worth more than $38 billion, and a large round of funding has come from a conglomerate that manufactures tobacco products.

However, there is proof that a significant portion of this achievement can be credited to young people in general, including kids and teenagers. The business undoubtedly believed this because a lot of effort was made in the beginning to make JUUL appear “cool” and appealing to younger customers. The business allegedly promoted to kids and teenagers directly and purposefully, even going so far as to give lectures in classrooms while disguising them as seminars on mental health and drug abuse prevention.

JUUL didn’t stop acting this way until the federal and state governments began looking into the matter and threatening the business with penalties and legislation. And they didn’t begin including adequate nicotine warnings on their products until they were required to do so by law. However, millions of people, including an unknown number of teenagers, have already used JUUL products without being aware of the risks. Many of whom are now addicted to nicotine.

It is a noble objective to provide adult smokers with a better alternative to cigarettes. Still, manufacturers of vaporizers and e-cigarettes are accountable for how their products are utilized, not just how they are advertised.

JUUL, a well-known manufacturer of nicotine vaporizers, took advantage of the chance to market to those under 18. Young people who have never smoked have been persuaded to try nicotine because of the company’s careless marketing and product design, increasing their risk of addiction and the myriad of health issues that may follow.

Although JUUL is working hard to improve, the harm has already been done. Suppose you’re one of the tens of thousands of people who used JUUL products when they were younger and later developed a nicotine addiction. In that case, you can eventually experience health problems due to nicotine usage and the suffering, agony, and expense of trying to quit. We believe JUUL should be held accountable for this injury and should pay you for it.

What harms exist in addition to nicotine addiction?

Whenever a business or producer disregards the safety of goods intended for the general population, We Fight For The People. Numerous reports of lung cancer and other smoking-related diseases have been linked to using e-cigarettes. There have also been numerous instances of e-cigarettes exploding or catching fire and inflicting injuries. Please get in touch with us immediately for a free consultation if you or a family member has experienced a sickness or injury connected to a JUUL or another e-cigarette device. On your behalf, we want to pursue redress and the possibility of justice.

What is the maximum age for a JUUL lawsuit?

We are only submitting claims on behalf of JUUL users who developed an addiction before 18 years old.

Can I submit a claim on my child’s behalf?

You may. You have the right to bring a lawsuit on behalf of a child or teen who used a JUUL and developed a nicotine addiction if you are their parent or guardian. We wish to assist you in pursuing compensation that might be used to cover the cost of treating your addiction and other related expenses.