Many people with sleep apnea used a device made by Philips Respironics, but instead of improving their sleep quality, it frequently resulted in cancer. Nothing is more upsetting than putting your faith in a medical product and the corporation that promises it will benefit you, only to have it do you harm. 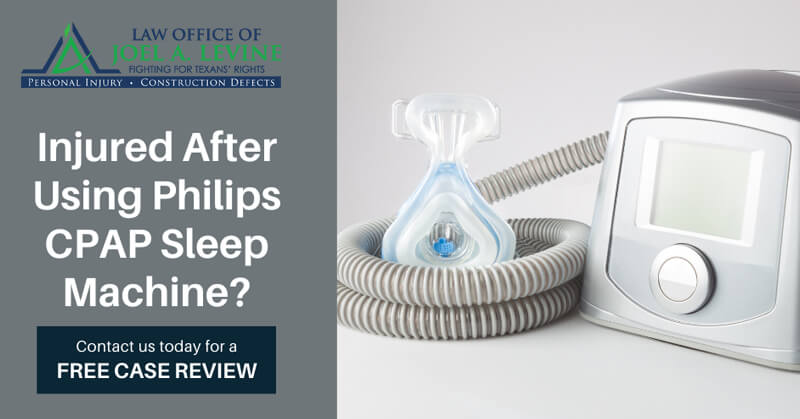 Millions of CPAP and other sleep apnea equipment were recalled by Philips because a flaw in the machines was causing many users to breathe hazardous foam. Ingestion of this harmful foam can result in cancer and other serious health issues. Along with cancer development, many users also experienced headaches, irritation of the upper airways, coughing, chest pressure, sinus infections, asthma, liver and kidney damage, nausea, vomiting, and worsening breathing issues.

Because the CPAP machines include polyurethane foam, which can break down inside the device and escape to be consumed or inhaled by the CPAP user, Philips recalled its CPAPs. According to the International Agency for Research on Cancer (“probably carcinogenic” in humans) and the National Toxicology Program (“reasonably predicted” to cause cancer in humans), urethane is listed by the American Cancer Society as a likely human carcinogen. Animal studies have shown that exposure to urethane can result in blood, liver, lung, and other malignancies.

Polyurethane with a polyester basis, or PE-PUR, is considered secure as a foam. However, the gases or minute particles that the foam releases as chemicals are poisonous to breathe or ingest. When Philips learned that its CPAPs, BiPAPs, and ventilators potentially remove such substances and endanger CPAP users, they decided to start the recall.

Inhaling the particle foam can make breathing difficult and potentially result in respiratory collapse. Also, living in foam containing germs or fungus can affect the lungs and respiratory system. When it comes to off-gassing, isocyanates and other polyurethane-related gases can irritate the lungs, and since these chemicals are carcinogenic, cancer is a concern.

A class-action lawsuit was brought against Philips in Massachusetts in June 2021. According to the case, Philips was aware of the hazardous foam’s dangers to people’s health for many years. According to specific reports, consumers have complained about the problems for a long time, but Philips didn’t publicly warn the public until April 2021. Two months later, Philips didn’t recall the products until June 14th, 2021. It’s interesting to note that Philips delayed announcing the recall of its products until just as a newer model was about to be released. Since many patients who urgently required these devices were forced to buy the unique model, Philips made money even after announcing their previous model’s recall.

28 October 2022 Update: After it was found that magnets in the face masks of some Philips CPAP devices were causing pacemakers and other surrounding medical devices to malfunction, Philips was compelled to issue yet another CPAP-related recall last month. The CPAP face mask magnet recall has now been given a Class I classification by the FDA, the most severe recall category, suggesting a risk of serious injury or death. 14 “severe harm” reports have already been submitted to the FDA.

Two violations are the basis for Philips’ lawsuits:

The fact that Philips marketed patients unsafe and defective gadgets is just one of the reasons consumers have sued the company. When the foam in the device degrades, it can result in cancer because it is so toxic.

Not only did Philips use hazardous materials in their medical gadgets, but they also failed to alert the public as soon as they became aware of the dangers. There are claims that foam consumers have long complained of health problems. Philips at least got aware of the problem in April 2021. However, it wasn’t until the middle of June 2021 that a recall was announced. This indicates that, despite Philips’ knowledge of the dangers, consumers continued to purchase and use the devices for at least two months.